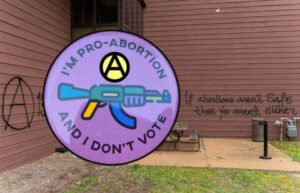 Given the recent braying and praying from local Liberal Party luminary, the unfortunate Bernie Finn, this seemed an apt article to share.

Earlier this week, the office of an Amerikkkan anti-abortion organization located in Wisconsin was firebombed by anarcho-feminists of praxis, operating under the moniker Jane’s Revenge.

(Ostensibly the group is named in recognition of direct action abortion network, The Jane Collective.)

In addition to fire-bombing the office, the group left spray-painted messages, “@ 1312” and “If abortions aren’t safe then you aren’t either”.

The group issued a statement of responsibility via encrypted channels and claim their initial attack was “only a warning”. Positioning themselves in response to lethal attacks on healthcare providers by anti-choice zealots, Jane’s Revenge promise to adopt “increasingly extreme tactics” to ensure bodily autonomy.

The group issued a 30 day ultimatum for all anti-choice organizations and fake clinics (i.e. crisis pregnancy centers) to disband, and warn they have ability to reach multiple locations.

This was only a warning. We demand the disbanding of all anti-choice establishments, fake clinics, and violent anti-choice groups within the next thirty days. This is not a mere “difference of opinion” as some have framed it. We are literally fighting for our lives. We will not sit still while we are killed and forced into servitude. We have run thin on patience and mercy for those who seek to strip us of what little autonomy we have left. As you continue to bomb clinics and assassinate doctors with impunity, so too shall we adopt increasingly extreme tactics to maintain freedom over our own bodies.

We are forced to adopt the minimum military requirement for a political struggle. Again, this was only a warning. Next time the infrastructure of the enslavers will not survive. Medical imperialism will not face a passive enemy. Wisconsin is the first flashpoint, but we are all over the US, and we will issue no further warnings.

And we will not stop, we will not back down, nor win we hesitate to strike until the inalienable right to manage our own health is returned to us.

We are not one group, but many. We are in your city. We are in every city. Your repression only strengthens our accomplice-ship and resolve.