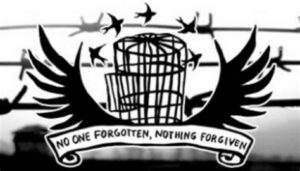 As a minimum solidarity gesture in recognition of June 11 International Day of Solidarity with Long-term Anarchist Prisoners, we publish the following article by self-described Kurdish troublemaker Jasmin Barzani.

What Happens in Our Prisons in the name of Covid

If there’s one thing that I learnt first-hand during the era of the COVID pandemic, it is that, in times of crisis, the way in which our most vulnerable members of society are sacrificed exposes the hierarchical logic that is always underpinning how society is governed. Indefinite isolation, the deprivation of treatment for mental illnesses, and the denial of meaningful human contact are the conditions that tens of thousands of people are continuing to experience every single moment, while the majority of Naarm celebrates the restoration of its privileges. I am of course talking about prison.

According to the ‘Nelson Mandela Rules’—the minimum standards for prisons recommended by the UN—solitary confinement is defined as isolation of twenty-two hours or more a day without meaningful human contact. Isolation of longer than 15 days is considered torture. When the state of emergency was declared, unprecedented state power converted the act of torture to the new, legalised norm. What has been referred to as ‘quarantine isolation’ across prisons in Naarm is in fact solitary confinement—a practice that has been criticised by NGOs and intergovernmental organisations for the permanent psychological and physical harm that it causes. Everyone who has entered prison during this on-and-off lockdown period has been forced into a minimum of fourteen days of solitary confinement.

During the eighteen days I spent in prolonged solitary confinement, I heard ‘COVID-19’ used as the justification for torture. I heard it when I was denied easily accessible over-the-counter medication for iron-deficiency and thrush, when I didn’t speak to a psychiatrist for two weeks despite having a developmental disability and a mental illness, when I was denied my rights to call family, to leave my cell for fresh air or physical exercise, to send letters, and to make formal complaints. Covid was the excuse when a young Aboriginal women was denied contact with a legally mandated Aboriginal worker. Covid was the justification when a prisoner attempted suicide with a metal butter knife, after her psychosis was left untreated for days. Covid was the reason provided when none of us in isolation were administered vaccinations. The word Covid was what we heard when we demanded why we were being held well past the quarantine period. Some women were held arbitrarily in solitary confinement for twenty-four days.

Twenty-four hours is a long time to endure when you are first thrown into a 4×4 metre cell, let alone twenty-four days. The first twenty-four hours is the window of time that is provided as a blanket deadline for all prisoners to speak to a doctor and psychiatric nurse. No amount of physical pain or psychological illness, short of dying, can set off the alarms for immediate medical or psychological attention within this period. I know this, because I overheard prisoner after prisoner being dragged into the cells on their first day, screaming in distress, begging for medical care, only to be ignored by the screws who recalled the twenty-four-hour rule. Any request for medical care, however urgent, gets the same response, ‘you will be seen by a doctor within twenty-four hours’. They would repeat this line mechanically to every woman who was screaming and begging for help.

During the first twenty-four hours in remand, the mind and body are in shock. Your freedom, privacy, autonomy, financial security, and all future plans have been ransacked. You are the most frightened and confused you have ever been in your whole life. Despite this, no information is given and no contact is made with you. I was not notified that there were multiple positive Covid cases in the prison when I entered the facility. At the same time, I was not provided with soap, utensils for drinking the tap water or disinfectant to clean my hands. When the screws finally made their first contact with me, inaudible demands were blurted through an envelope sized metal slit that is located on the lower third of the thick metal door. Like the rest of the women, I was forced onto my knees on a daily basis, onto the cold and dirty cement floor, so that I could attempt to make out what the screws were saying through the metal slit. The screws, in their bio-hazard dystopian fashion, were further detached by a three-layered physical barrier—a plastic face shield, the N95 mask, and the cell door.

Dying does not even suffice to alert the attention of the people who are responsible for the care of prisoners. In the single year of 2019-2020, 113 people died in custody. Seventy-nine of these deaths were for unknown reasons. Sixteen of them were Aboriginal or Torres Strait Islander people—who, according to coronial reports, are three times less likely to receive necessary medical care while in prisons. But we don’t need statistics to know this. Everyone who has a lived experience of incarceration knows that the ones who didn’t make it, didn’t receive the medical care that they needed. We know beyond reasonable doubt that these so-called deaths in custody are in fact murders in custody. Murders that are state-sanctioned and socially accepted, and for whom nobody is held accountable.

The low rates of vaccination in prisons cannot be explained through vaccine hesitancy, which has been the media and governments favorite scapegoat. In the usual fashion, migrant, Indigenous, the global ‘south’, and working-class communities, have become pathologised as too unintelligent, underdeveloped or just not modern enough to want the vaccine. Their fault is that they have chosen to be ‘hesitant’. Statistics that show lower rates of vaccination in Aborginal and Torres Strait Islander or migrant communities are often correlated with a vaccine hesitancy that is, at its best, pinned on the distrust towards institutions that have historically subjugated them. This seemingly progressive stance, masks what the phrase ‘vaccine hesitancy’ alludes to: that all of these people for some ultimately unreasonable reason do not want to get the vaccine. In prison, the provision of vaccines is entirely outside the power of individuals who, by definition of being incarcerated, have no ability to choose what happens to their bodies. Yet vaccination rates in prisons have consistently been lower than the general population. This puts a spotlight on how when states have full power and control over individuals, they deny them health, safety, and inevitably their lives.

The government has not failed these people, and the system is not broken. The abysmal conditions in Victorian prisons are not because the criminal justice system needs more funding.

Without exception, every screw, doctor, or nurse who I complained to about my conditions, insisted that their hands were tied because they didn’t have enough funding. Yet between 2013-2019 state funding on prisons in Victoria grew by 96 per cent, compared with the health sector which only grew by 45 per cent. More funding in prisons does not equate to better health outcomes for prisoners, but inevitably leads to more cells, thicker prison walls, and enhanced surveillance.

The criminalised have always been, and continue to be, one of the many populations who are treated as excesses, surplus, others, the subaltern. Since they’re less often exterminated en masse than in the past, they need to be put to a slower, more sophisticated death. Patrick Wolfe calls the ongoing systematic erasure of Indigenous people, ‘the logic of elimination’. Michel Foucault calls the logic that inferiorises certain groups as ‘state-racism’. During times of crisis, this logic is brighter than ever, but nevertheless it always exists as a fundamental pillar upholding how we are hierarchically governed. The purity of the white, settler, middle-class, obedient, abled citizen is supposedly protected against the rest who—through a mixture of neglect and subjugation—are put to a slow death.

On December 17, when we reach the end of the state of emergency declared under the Biosecurity Act 2015, prisons will continue to permanently traumatise over 42,000 prisoners held across so-called Australia, as well as over 1400 prisoners detained in immigration prisons.

While prisoners experience a particularly all-encompassing violence, there are Kafkaesque similarities that are shared with all excess populations. In the name of justice, prisoners are tortured, but in the name of property, homeless people are also brought closer to death. In the name of white and settler-supremacy, Aboriginal people continue to survive through a slow genocide, while in the name of borders and safety, refugees and asylum-seekers are killed in immigration prisons. This is how I know that the state-sanctioned torture that has been occurring in prisons during the pandemic will not end when the pandemic is over. The same logic that facilitated the exacerbated torture of prisoners during the state of emergency, will continue to exist in our prisons, phychiatric wards, and immigration prisons well past Naarm’s return to ‘normal’.

Rather than subject prisoners to restrictions that isolate and traumatise them in the name of public health, a true public health response would be to release everyone. Emergency powers could be used to release all incarcerated people into the community. The available choice for our politicians to respond to COVID-19, by swinging the pendulum in the direction of broader freedom, has instead been suspended on the side of what can only be described as legalised torture. Prisons are a petri dish for COVID-19 and no amount of restrictions in these prisons can change the fact that they are high risk places of transmission. The forty-six refugees who are imprisoned in the Park Hotel began receiving vaccines six months later than the general population, resulting directly in the outbreak we saw there just last month.

The notion that incarcerated people cause more harm to society than the harm that society suffers through their incarceration is a frequently cited justification for prisons. But it is just a hypothesis that cannot be proven by any meaningful data. Abolitionists like Ruth-Wilson Gilmore and Angela Davis have successfully argued that the cost society pays for the trauma inflicted on these individuals is actually far greater than the cost of their ‘crimes’. The legalisation of widespread torture that has been occurring in prisons during the COVID-19 state of emergency is a lesson in why prison abolition is the appropriate response to the carceral system. No amount of funding or reform can change a logic that is grounded in the elimination of excess populations. For this reason, it is prisons that must be eliminated.