On Sunday 24 April 2022, a handful of motley whores, organised under the moniker (and literal banner) Class Whore, facilitated a hastily convened sex worker stall at the Incendium Radical Library and Collective Zine Fair.

Class Whore were pleased to share neighboring table space with an anarcho Harm Reduction stall, whose zine offerings included articles and analysis highlighting the radical origins of harm reduction as civil disobedience, and drug user self-organising. Included was a zine containing analysis of the INDUE card, originally published on the sadly defunct (and greatly missed) Anarchists Worldwide blog. (On our other side was a stall tended by a guy who looked a bit like this?)

Using our highly-honed financial extraction skills, Class Whore raised $208, which was donated to our friends at Decolonise Sex Work.

Genuine thanks to everyone who supported the stall and hopefully we’ve emailed PDF versions of the zines to everyone we promised we would! (If, for some reason we’ve overlooked you, we apologise immensely!) 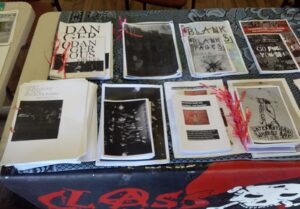 A Disgrace Reserved for Prostitutes: Complicity and the Beloved Community

A fierce essay by Pluma Sumaq exploring the intersections of race, class, and gender with sex work, the sex industry, and the sex worker rights movement. Strong critiques of white and neo-liberal feminism.

Quote from the text: “Personally, I could never bring myself to buy into the rhetoric of empowerment through the normalisation that the mostly white middle-class sex worker righrs movment was selling. To create a language around and an image of a “sex worker” that is normalised and free of stigma did not seem very revolutionary to me. To me it said, “accept us because we are just like you.” Well, what if we’re not like you?”

Grin and Bare it All: Against Liberal Conceptions of Sex Work

An exploration and analysis of gender roles and sex work/ the sex industry from the perspective of an anti-capitalist/ anti-authoritarian anarcho sex worker.

Quote from text: “…we need analysis of sex work, and labor generally, that is born from a synthesis of various anti-authoritarian and anti-capitalist feminisms…We must additionally look beyond sex-positive leftist rhetoric around consent, consumption, and sex workers’ “rights,” to a more totalizing critique of capitalism and the sex industry.”

Quote from text: “Prostitutes have unique access to the ‘elite’: the industrialists, maggot-strates, our fine representative politicians, religious leaders, the ultra-rich and their lackeys in the filth. Those who urgently press their grubby money on us, out of a pathetic desire for affirmation and as an antidote to their miserable lives. And thereby we have the power to wreak terror and humiliation upon them! We are uniquely placed to expose their hypocrisy and pathetic predilections.”

Bite the Hand that Feeds You

Quote from text: “i wasn’t born a woman, i wasn’t born a lesbian and i wasn’t born a whore, i’ve been exiled into a woman, into a lesbian and into a whore and from my exile i have embraced criminality, and from my exile i will annihilate the world that named me, gendered me, raped me, killed my friends. i have no interest in activism, i’m not a trot or some shit, i’m just someone who means it when they say that they’ve got your back. criminal intimacy is the most powerful form of togetherness queers can experience, our existence is criminal per se, we threaten the world with our being here every single day, we might as well embrace it and throw some strategy in there am i rite.”

Quote from text: “June 2nd of each year commemorates the occupation of Saint Nizier Church in Lyon, France by more than a hundred sex working people in 1975 who were protesting police terror and brutality. During this 8 day long occupation sex workers demanded among other things an end to police harassment the reopening of the hotels where they worked and the scrapping of anti-pimping laws that targeted their lovers, coworkers, and friends. The day is actively celebrated internationally and has been a day to assert collective sex worker power and make demands on society since 1975!

Carrying on in this radical tradition of organizing, our IWD actions must center and uplift our most vulnerable community members. The state (and their armed agents–the cops) most often target immigrant, undocumented, POC, trans, gender non-conforming, drug-using, and cash poor workers for violence.. We want to amplify the ongoing struggles within these (often intersecting) communities for self-determination, respect and liberation..Sex workers are resilient af, but goddamn, we shouldn’t have to be.”

An easily digestible article exploring whorearchies within the sex worker movement; the parasitical nature of anti-trafficking (or rather, anti sex work) NGOs and their relationships with rabid Xtians, authoritarian feminists, and the carceral system; the impacts of gentrification; and a call for sex worker resistance influenced by militant traditions.

Quote from text: “The struggle of sex workers and the longevity of our struggle relies on our ability to continue the militant practices of the black radical tradition, to stand in solidarity with those defending their indigenous land from pipeline development and other state-sanctioned genocidal expansions, and to remember that the hope for queer liberation was fought against the police in a riot at Stonewall by black and brown trans women, prostitutes, queens, dykes, and other gender traitors. We refuse to let these daring, courageous moments of our legacies be distorted and rewritten into playbooks for passive resistance. Today solidarity means, fight back.”

Be Gay, Do Crime! I Don’t Bash Back, I Shoot First!

An inspirational how-to guide to forming an unruly illegalist queer gang and reveling in flaunting life outside the staid rules of the cis-tem. Absorb, implement, and prosper together queer crims!

Quote from text: “Nothing burns like getting tricked by a trick and after one too many times I was ready to quit sex work but how the fuck was I going to get money? Rich chaser fuckers all married with kids and cars and shit getting uppity and treating a girl like shit—I know they hate loud trannys except when they wanna fuck me so after talking with a few people we got an idea—so you know, after a couple days of scheming up craigslist I had more work lined up for the weekend, but things went a little different this times—I’d already let everyone know where I was going, so when he brought me into his big nice house in his nice neighborhood, I left the door open, snapped his picture, and put a small gun to his head. Then all my grrrls rushed in and took what shit was ours—the trick just looking helpless and he knew we had blackmail so kept his trap shut. Once everyone was done we thanked him for helping a girl out and left him pistol whipped n bleeding. The next time, knocking the trick out was just how it started. THEY HAVE A LOT MORE MONEY WHEN YOU TAKE WHAT YOU DECIDE YOU’RE WORTH LOL!”

Advocating for militant self-defense (and a healthy dose of revenge) as a legitimate response to sexual assault, fascism, state brutality, and misogyny – Dangerous Spaces contains a collection of articles, communiques/ action reports, musings, and calls to action. Featuring exhortations for a new era of (trans and gender diverse inclusive) anarcho-feminism, critiques of identity politics, and refusal to be victimized, this text is Class Whore mandatory reading!

Quote from text: “There is a violence that dominates. It is gay bashing. It is rape. It is the clear-cut and the vivisection lab. It is the bank and the local coffee shop. It is the patrol car and the prison. It is your job, your late rent, your rotting teeth, your wounds that won’t heal. It is the silence that maintains all of the above.

There is a violence that liberates. It is the murdered homophobe. It is the knee-capped rapist. It is the arson and the mink liberation. It is the smashed window and the expropriated food. It is the cop on fire and the riot behind bars. It is work avoidance, squatting, criminal friendship, and the total refusal of compromise…

Quote from text: “Sylvia Rivera and Marsha P. Johnson were not respectable queers, nor were they poster-children for the modern image of “gay” or “transgender.” They were poor, gender-variant women of color, street-based sex workers, with confrontational, revolutionary politics and, in contrast to the often abstract and traditionally political activists of Gay Activists Alliance, focused on the immediate concerns of the most oppressed gay populations: “street gay people, the street homeless people, and anybody that needed help at that time” (Sylvia Rivera quoted in Feinberg). Within the predominantly white, non-gendervariant, middle-class, reformist gay liberation movement, Sylvia and Marsha were often marginalized, both for their racial, gender, and class statuses, and for their no-compromise attitudes toward gay revolutionary struggle.”

“STAR is a very revolutionary group. We believe in picking up the gun, starting a revolution if necessary. (Sylvia Riviera)”

Quote from text: “Let men have their fun blabbering on and on about the Revolution—They’re free to do it! The nihilist women are tired of all this procrastination and are determined to act. Thinking about annihilating the bourgeoisie, they are ready to sacrifice everything to hasten the realization of this undertaking. In the inextinguishable hatred that is devouring us, they will call up whatever strength is necessary to overcome all obstacles.”